Unlocking the mystery of blockchain

Blockchains, and the technology that powers them – distributed ledger technology, or DLT – have been featured in lists of digital trends for years, and heralded by organizations as a strategic priority for just as long. But for many, the concept has been difficult to grasp, and the application of these technologies isn’t generally well understood. Many of our clients have expressed both interest and confusion in blockchain as a topic, so with this article, we’ve tried to provide a basic overview of what blockchain is, how it can be used, and whether you need to be concerned about it.

1. What is a blockchain and how does it work?

Blockchain is a way of implementing a distributed ledger. Ledgers have been used for thousands of years to track transactions; distributed ledgers harness modern technology to enable this information to be shared across multiple parties. This innovative approach aims to increase transparency, traceability and confidence in information being shared and updated across multiple parties.

a) Keeping track of data
First and foremost, a ledger is a way of keeping track of information. In a traditional ledger, line items are written into a single location, normally by a small group of authorized users.

So how do we keep track of a ledger where multiple parties each hold a copy, and each party can add an item? In order to add a line entry, a digital signature must be used to uniquely identify not only its own contents, but the contents of every line item that preceded it. This may seem convoluted, but the same logic is used in a simple children’s game where you must memorize an ever-expanding list of items before adding a new item yourself.

We can think of each shopping list item as a signature that demonstrates how the sentence concocted by each player belongs in the game. If an errant schoolchild were to try and modify the data – for example, by claiming that Item 4 was doughnuts rather than dates – an error would be detected and their contribution would be rejected as invalid.

In blockchain, the equivalent signature is generated by running the contents of the line item (or ‘block’) through a cryptographic routine called ‘hashing’, which produces a unique code. If we want to add another item to the ledger, we take the signature of the preceding item and add it to the new block’s contents, then hash them together to produce the new block’s signature. 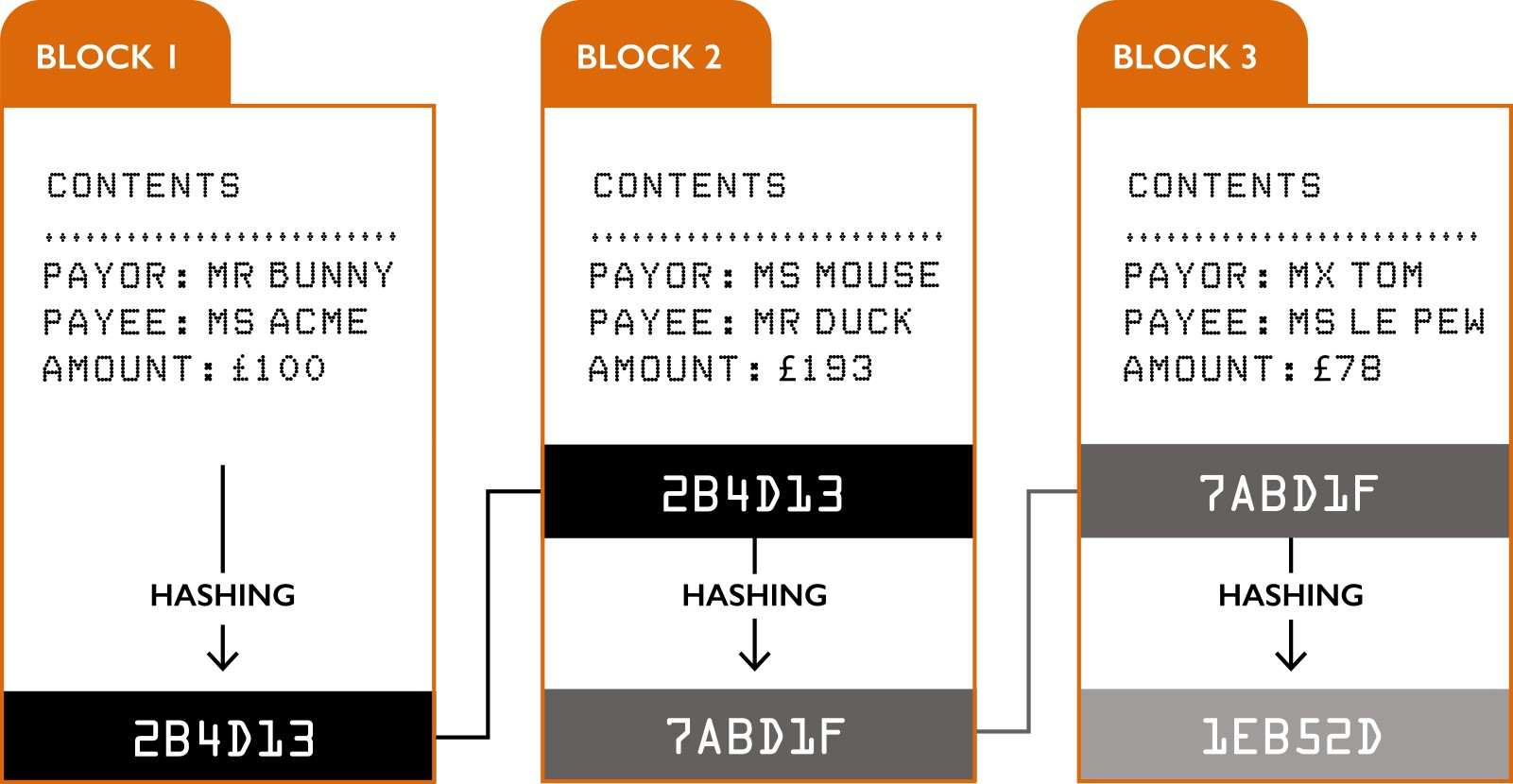 b) The distributed network
Each member of the network receives a copy of the entire chain when they join, and when a new block is created, it is sent to the whole network for everyone to check that it’s in line with their copy of the chain. In our children’s game example above, we rely on all players listening to the person whose turn it is to agree that what they have said matches the rest of the list.

In blockchain, this means that even if a fraudster were to successfully compromise the signatures in a single copy of the chain in order to change or add a faulty block, the validation against everyone else’s copies would fail. That said, if a bad actor were able to take control of most of the validation network, they might still be able to force the change through – thus the distributed network must have enough members to make this virtually impossible. 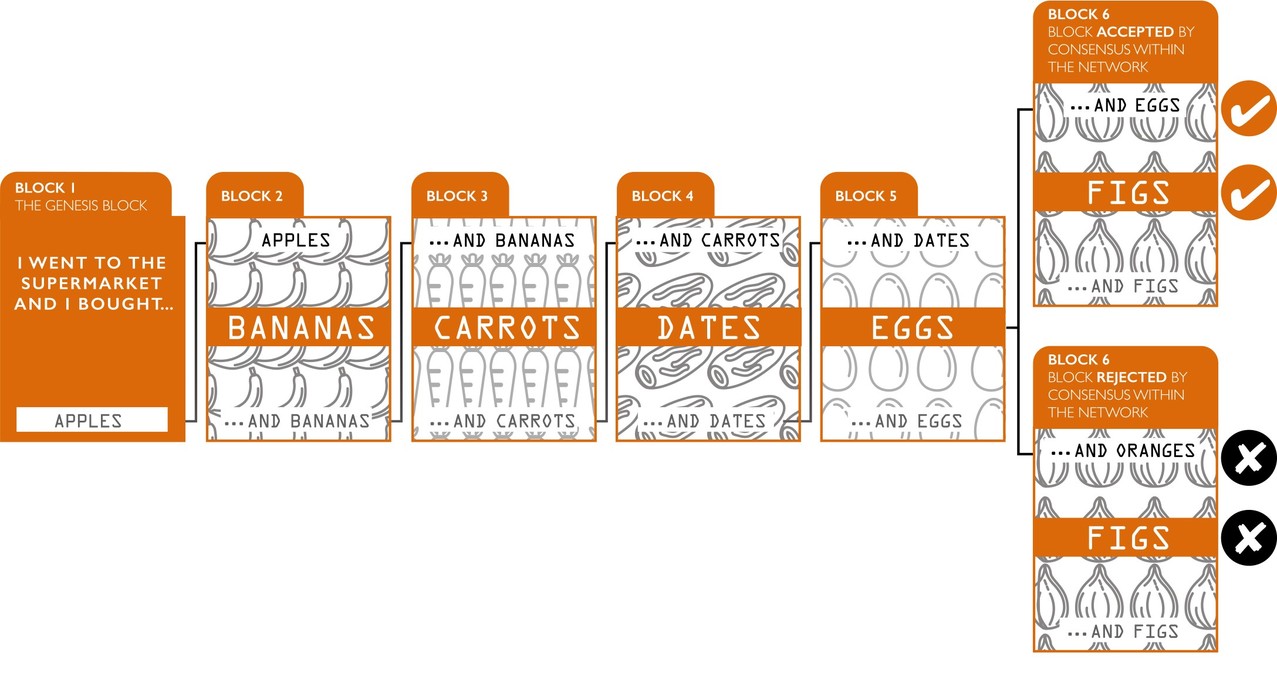 c) Creating consensus
Given the above, determining who is allowed to add new blocks and how to agree the validity of the data therein (known as ‘consensus protocols’) is vital. In a private network, a hierarchy may exist where consensus is driven by certain super-users.

In a public network open to all and with no pre-determined hierarchy, there must be some other way. Bitcoin gets round this by constantly generating mathematical problems; the first actor to solve the problem is granted authority to add the next block in a process known as ‘bitcoin mining’.

Collectively, these three components of construction mean that in theory, distributed ledgers are far less susceptible to fraud than a standard ledger of information.

2. How is this technology being used?

Blockchains are often useful in situations where it’s important to understand the provenance and lifecycle of information, assets or transactions. It’s already being used or tested in a few areas:

1) Cryptocurrencies
Possibly one of the most well-known examples of distributed ledger technology is the creation and management of virtual currencies, such as Bitcoin and Ethereum.

2) B2B banking payments
Large banks regularly lend, borrow and net settle cash at key intervals throughout the day. These transactions are high in volume and frequency, take place in a closed market, and create issues of trust and reconciliation between the players. As such, it makes sense for participants to create a distributed ledger, reducing the risk of a single point of failure and enabling everyone to share access to a reliable record of transactions.

3) Supply chain management
Helping manufacturers track where goods come from, and where they’ve been along the way. For example, in the fashion industry, distributed ledgers could help assure that fabrics and garments are being produced in factories with ethical practices, or in the auto industry, to help track the provenance and quality control of car components. Equally, applications in the medical sector have been posited to help control the supply chain of prescription medications, and to manage individuals’ medical records.

The technology has many more potential applications – in theory, blockchain could ultimately be used to track any type of transaction with any asset, physical or digital, and the technology could become as ubiquitous as the internet.

However, challenges still exist that, for now, limit its scalability.

3. Do I need to worry about blockchain?

DLT is both new and complex. As such, there are still questions that need to be answered and areas of concern regarding the circumstances in which it can be effective. These can be summarized into four categories:

1) Scalability and bandwidth constraints
Maintaining network synchrony amongst a few actors is easy. Maintaining it amongst thousands or millions of actors as it grows is a real challenge. By definition, when a new block is added to a chain, it has to be distributed and validated by the other system actors. At present, this results in a time delay that means blockchain isn’t suitable for industries that depend on real-time updates – for example, stock trading.

2) Ensuring consensus
Getting all actors in a distributed network to agree on the accuracy of information is at the boundaries of our current technical capabilities. It’s easy to assume that when we talk about bad information being introduced into a blockchain, we’re talking about a malevolent actor engaged in fraud. But it’s equally possible that it’s simply a technical failure.

Imagine twenty sensors on the wing of a plane. For the pilot in the cockpit to be presented with information that helps her make decisions, those sensors have to form a rapid consensus and transmit that information to the pilot. But what if one of the sensors malfunctions?

In a similar way to aviation equipment, for blockchains to maintain integrity, they need a way to function even if part of the network falls down, or begins to report erroneous data.

In private distributed ledgers, as noted, this can potentially be overcome by the use of rules and permissions that create priority amongst actors. But in public distributed ledgers, where no one participant has greater weight than another, this is an incredibly complex mathematical problem to solve, and in practice means that if 51% of a network based on proof of work consensus falls down, the entire blockchain will collapse permanently.

Of course, there is a parallel risk in a private blockchain – if you have established a single actor in the network capable of total override, if that actor is compromized, your entire blockchain fails permanently.

3) The absence of regulation…for now
Regulators have yet to fully respond to blockchain, and it’s likely that as the technology becomes more widespread, organizations will encounter legal restrictions on the establishment and governance of distributed ledgers—particularly where such arrangements carry potential risk or impact upon a consumer.

4) The danger of overestimating blockchain’s capabilities
It’s important to remember that blockchains will never solve the problem of ‘garbage in, garbage out’; they are not in themselves a quality control mechanism and businesses will have to look elsewhere to fix such problems.

As such, in the immediate term, blockchain is probably better fit for the following types of organization:

If you’re active in industries that are heavily dependent on ledgers that track information or things, you may need to keep a particular eye on the risk of disruption to your business via an industry-wide distributed ledger. If there’s a chance that such centralization might occur, you may find there are real advantages to being one of the architects of such a system, rather than a passive participant. 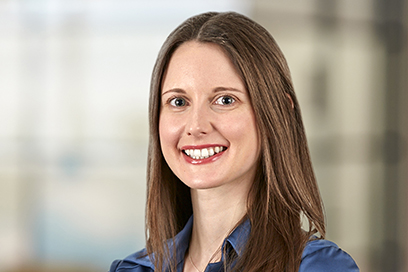